⭐️⭐️PATRON⭐️⭐️
Can we have an option to keep a tab on space requirements for downloads? I guess you can ballpark it and just assume 50 per title, but it would help fine-tune a bit.

Is there an option to add a bundle shopping function to 'wish list?' 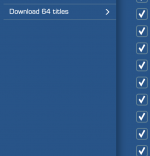 9riffTX said:
Can we have an option to keep a tab on space requirements for downloads? I guess you can ballpark it and just assume 50 per title, but it would help fine-tune a bit.

Is there an option to add a bundle shopping function to 'wish list?'

Regarding the Wish List, the limitation on the web store is that it won't show you the option to select multiple titles if the collection you're viewing is large enough to span multiple pages. So one solution to work around this is to apply a filter to your Wish List that brings the number of titles shown down to a single page, and then you'll get the bundle option.

On a similar note, it would be fantastic to have a checkbox next to each title in the downloads queue. That way when downloads are "Resumed" only the titles checked, would download. The remainder would stay in the queue.

Currently, having to watch the downloads queue and "Pause" it right after the last title I would like downloaded, is downloaded doesn't always work. Often times another title starts downloading before I catch it.

I only have 6TB and a queue of about 200 titles I've purchased from the store that need to be downloaded and watched. With the current download system, if I miss "Pause" on the download queue after a title has downloaded, the next title starts being downloaded and counts against the storage for the full title, even though it hasn't been downloaded yet. Most of the time, it is just inconvenient to watch the queue. I can't always do that.

The Strato is good at managing the space and resuming the queue even if stopped in the middle of downloading a title, but I've found when I max out storage, it performs more slowly as do most modern day computers, phones, etc. I'm trying to keep a certain amount of free space, which I've found does help performance and reduces the few errors I have sometime seen.